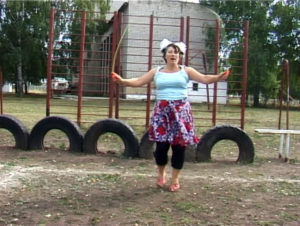 Tralla often draws inspiration from her childhood. Fat Kid Pretty Kid is no exception. It reflects on her personal experience of kind of ‘positive bullying’ by her grandmother. In Estonian countryside it is common to tell about healthy children “Fat Kid Pretty Kid”. The saying goes back to times, when peasant family well-being was evident by the plumpness of their kids, whose weight was a sign, that there was enough food in a household. However, the artist grandmother added an extra bit to the sentence and greeted her often with “Fat Kid Pretty Kid if it’s not a Girl”. Through this sentence the idea, that different rules apply for a girl then for a boy was emphasized. The small sentence stayed with the artist as a reminder of those different rules. To free herself of the negative memory she chants the sentence over and over while skipping, pointing to the pressures girls have about their bodies and weight, which is formed by relatives, friends, media and now government regulations.